The Vought F4U Corsair was a carrier-based fighter aircraft that saw service in World War II and the Korean War. The plane was designed and produced by Chance Vought Aircraft and had one of the longest production runs of any piston-engine fighter aircraft in history. The Corsair was designed as a carrier-based aircraft, but it proved to be so successful on land that it became one of the most widely used fighter-bombers of the war.

Demand for the aircraft soon overwhelmed Vought's manufacturing capability, resulting in production by Goodyear and Brewster: Goodyear-built Corsairs were designated FG while those built by Brewster were designated F3A.

It is estimated that over 12,500 Corsairs were built between 1940 and 1952. Today, the airplane is highly revered by aviation enthusiasts and warbird collectors alike. In this blog post, we'll take a deep dive into the history and design of this iconic American fighter plane. Stay tuned. 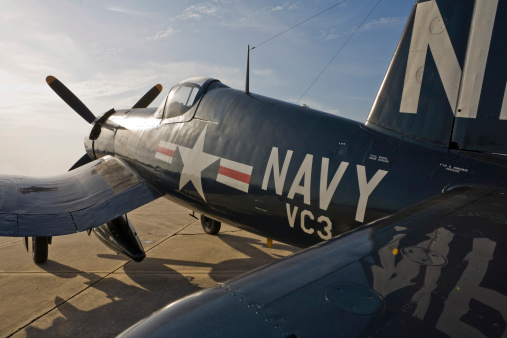 In 1938, The U.S. Navy Bureau of Aeronautics requested a single-engine fighter to call for a maximum obtainable speed and a stalling speed no higher than 70 miles per hour. The fighter also had to carry four guns or three with increased ammunition. The Navy specified that provision needed to be made for anti-aircraft bombs to be carried on the wing. In the 1930s, it was believed that these small bombs would be dropped on enemy aircraft formations.

The development of the Vought F4U Corsair was a significant event for the U.S. Navy. The prototype, designated the V-166B, was signed for by Vought in June 1938.

The prototype was completed quickly and had an impressive engine, propeller, and wing. The first flight went smoothly until the elevator trim tabs failed because of flutter.

The development of the Vought F4U Corsair was not without its difficulties. The aircraft had speed and climb requirements that had to be rewritten, and in full-power dive tests, speeds of up to 550 mph (890 km/h) were achieved.

While this was impressive, it came at a cost, as the control surfaces and access panels sustained damage, and in one case, an engine failure occurred. In addition, the spin recovery standards had to be relaxed. Despite these issues, the Corsair went on to be a successful aircraft with the impressive landing gear.

The F4U Corsair was designed with a large engine to extract as much power as possible. A Pratt and Whitney R-2800 Double Wasp radial provided 2,000 hp (1,500 kW). A Hamilton Standard Hydromatic three-blade propeller of 13 feet 4 inches (4.06 m) was used.

The Corsair was powered by a large radial engine and had a large propeller that made it one of the fastest aircraft in World War II. It could fly at over 400 mph (640 km/h) at altitude and had a range of over 1500 miles.

The different variants of the Corsair were outfitted with different armaments, depending on their intended role. While most variants carried the standard armament of six .50 caliber machine guns, some models were equipped with four 20 millimeter cannons.

The Corsair saw action in all theaters of the war and was the main fighter of the USMC until the jet age. After the war, it remained in service with various air forces until the early 1950s. 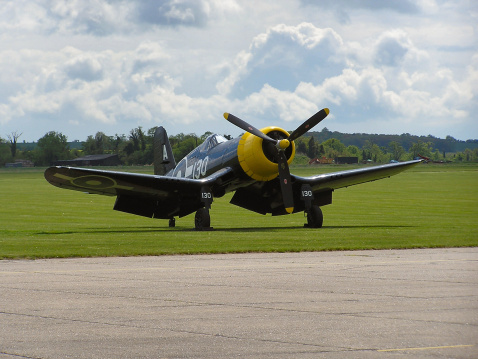 The Vought F4U Corsair was a carrier-capable fighter aircraft that saw service in World War II and the Korean War. The aircraft was first flown on 29 May 1940 and entered service with the United States Navy in December 1942. The Corsair served with the U.S. Navy until the end of the war and continued to operate until 1979.

The Corsair first flew in 1940 and began entering service with the U.S. Navy in 1941. Initially, the aircraft was used as a fighter-bomber but was later adapted for use as a carrier-based fighter. During World War II, the Corsair saw action in both the European and Pacific Theaters and continued to be used by the U.S. military in Korea and other conflicts in the years after the war.

After its initial flight in 1940, the Corsair underwent testing by the U.S. Navy. The Navy was initially skeptical of the aircraft, but after the Corsair proved its worth in testing, it was released to the U.S. Marine Corps for combat use in 1942.

The Corsair quickly proved its worth in combat and was used extensively by the Marine Corps in Pacific and European Theaters. It was particularly effective as a fighter-bomber and was often used to attack enemy ground targets.

To make the Corsair more suitable for use on land, the Marine Corps made several field modifications to the aircraft. These modifications included adding wheel pants and a tailhook and increasing the fuel capacity.

The Corsair was particularly effective as a fighter-bomber and was often used to attack enemy ground targets.

After the war, the Corsair continued to be used by the U.S. Navy in several different roles, including as an aircraft carrier and fighter-bomber. The aircraft saw action in both the Korean War and the Vietnam War.

In addition to the U.S. military, the Corsair was also used by the Royal Navy during World War II. The British Royal Navy made several modifications to the aircraft to make it more suitable for use on carrier decks, including adding arrestor hooks and increasing the fuel capacity.

The Corsair was first deployed by the Royal Navy in 1943 as a fleet air arm service and saw action in both the European and Pacific Theaters during World War II.

The Royal New Zealand Air Force also used the Corsair during World War II. The aircraft saw action in the Pacific Theater and was particularly effective against Japanese ground targets.

The Corsair continued to be used by the U.S. military in Korea after World War II and saw action in both the air-to-air and air-to-ground roles.

The French Aéronavale first used the Corsair in the First Indochina War in 1949. The aircraft saw action in various roles, including as a fighter, attack aircraft, and night fighter.

In addition to its use by various military forces, the French Air Force also used the Corsair for some experimental purposes, including as a test aircraft for new weapons and equipment. 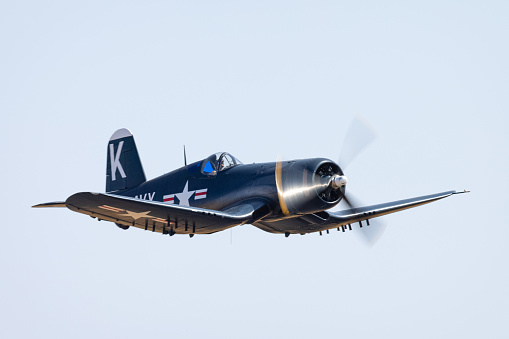 The Corsair was a carrier fighter that saw service in 1942. However, its low-speed handling was tricky due to the left-wing stalling before the right-wing. Together with poor visibility over the long nose, this factor made carrier landings a difficult task.

For these reasons, most Corsairs initially went to Marine Corps squadrons which operated off land-based runways. USMC aviators welcomed the Corsair with open arms as its performance was superior to the fighter squadrons and corsair pilots.

The Vought F4U Corsair was a powerful fighter aircraft that could outperform the Japanese A6M Zero. The Corsair was faster and could climb and dive better than the Zero, making it a deadly opponent in combat. The Corsair's six .50-caliber machine guns could also do a lot of damage, giving the marine pilots enough firepower to take down an enemy plane.

During World War II, the Vought F4U Corsair was a highly effective aircraft, earning nicknames such as "The Sweetheart of the Marianas" and "The Angel of Okinawa" from infantrymen. Navy and Marine aviators also nicknamed the aircraft "Ensign Eliminator" and "Bent-Wing Eliminator" due to the increased amount of training required to fly it compared to other carrier-borne aircraft.

Many also know the Corsair as the "U-bird" or "Bent Wing Bird." Although it is commonly claimed that the Japanese called the Corsair the "Whistling Death," Japanese sources do not support this. Instead, they mainly knew it as the Sikorsky. 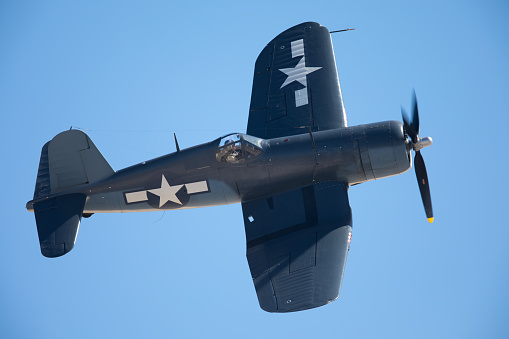 The Vought F4U Corsair was an impressive aircraft. It had a powerful engine, could reach high speeds, and be durable. With its many features, the Corsair performed well in combat and helped lead American forces to victory. We hope that you've found this information helpful. Let us know in the comments below.

Curious about Major Greg Boyinton and his role in the greatest amercian fighter aircraft?